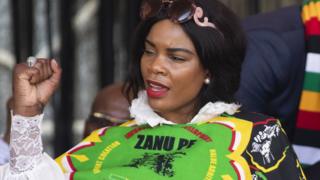 Marry Mubaiwa was remanded in custody in Harare

The estranged spouse of a Zimbabwean vice-president has been charged with making an attempt to homicide him.

Marry Mubaiwa, who’s already accused of corruption, appeared in courtroom in Harare on Monday. She denies all the costs.

Prosecutors say she tried to kill Gen Constantino Chiwenga whereas he was receiving remedy in South Africa.

The overall alleges that Ms Mubaiwa tried to stop him from getting medical remedy in South Africa six months in the past. When he was admitted to hospital in Pretoria, it’s alleged she pulled an intravenous drip out of his arm.

Gen Chiwenga then went to China for 4 months of remedy, returning final month.

Ms Mubaiwa was remanded in custody with bail denied.

When she was arrested on Saturday, police mentioned Ms Mubaiwa was accused of fraud and cash laundering costs totalling about $1m (£750,000).

BBC Africa correspondent Andrew Harding says the case matches the sample of a rustic the place the elites accuse one another of assassination plots and poisonings and the place the police and courts are sometimes used to settle scores.

Zimbabwe is at the moment nonetheless gripped by hyperinflation, energy shortages and mass starvation.