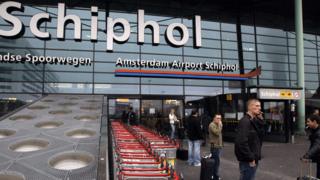 Dutch police say they’re investigating a “suspicious scenario” on board a airplane at Amsterdam’s Schiphol airport.

An hour after the primary reviews, police mentioned the passengers and crew have been now safely off the plane.

The character of the incident has not been confirmed and police say the investigation is ongoing.

The incident was described as a GRIP-Three scenario, Dutch officers mentioned, that means an incident or critical occasion with main penalties to a neighborhood inhabitants.

One journalist on the scene tweeted pictures exhibiting emergency automobiles on the airport’s tarmac.

Schiphol is likely one of the busiest transport hubs in Europe, dealing with greater than 70 million passengers a yr.