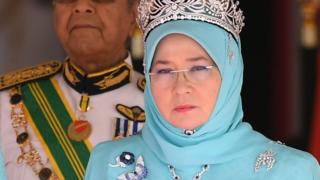 Malaysia’s queen has briefly returned to Twitter to specific disappointment at police arresting individuals for allegedly insulting her on social media.

The Raja Permaisuri Agong stated she and the king had not requested the police to behave and she or he was very upset on the information.

This adopted Friday’s arrest of an activist within the western metropolis of Klang for allegedly posting insults.

The Raja Permaisuri Agong is assumed to have first deleted her account on Wednesday.

It prompted hundreds of Malaysians to induce her to rethink and proceed posting updates.

The thriller of screaming schoolgirls in Malaysia
An unintended celeb 6,000 miles from dwelling

Malaysia has an uncommon constitutional monarchy, the place the highest job rotates between 9 hereditary state rulers each 5 years.

What did the queen say?

In a collection of tweets which have now been deleted, the Raja Permaisuri Agong stated she had initially left Twitter for private causes.

“I’m actually upset that the police have detained these individuals. By way of the years, my husband and I’ve by no means made any police report on dangerous issues stated about us,” she wrote, in response to the Straits Occasions newspaper.

She stated she had reactivated her Twitter account after listening to concerning the arrest as a result of she was “offended and upset”.

“I personally informed the Pihak Istana to tell the police to not take any motion. I repeat once more, I didn’t deactivate my account due to them,” she stated.

What occurred to the activist?

He was arrested beneath a 1948 sedition legislation – which has lengthy been criticised by the political opposition and rights teams – and subsequently spent the evening in a police station earlier than being launched on bail on Saturday.

PSM deputy chairman S Arutchelvan informed the Straits Occasions that the arrest had been pointless and stated Mr Ismath had denied insulting the queen.

Why did the queen go away Twitter within the first place?

Earlier than briefly reappearing on Twitter, she posted on Instagram that she had left Twitter for private causes and never as a result of she was offended at what individuals had been writing about her. She additionally urged individuals towards reporting posts to the police.

The Raja Permaisuri Agong had been criticised on social media throughout Malaysia’s Independence Day celebrations on 31 August for taking a lot of images, with some saying she had “behaved like a small baby”, in response to the Malaysia Star newspaper.

However she responded that the king had requested her to take the images.